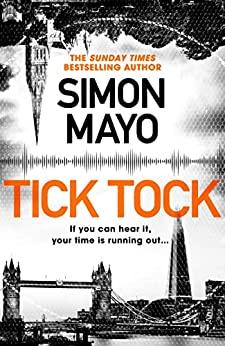 Thrilled to welcome best selling author Simon Mayo back to the Wirral! Talking  about his roller coaster of a book Tick Tok!

“Another cracking read from a man of many talents”

“This is an excellent conspiracy theory thriller, it’s exciting, full of danger… it’s riveting and hard to put down”

“Never has there been a more timely thriller! I was gripped from the first page. I was so immersed, I read it in one night. This book should come with a warning – may take over your life!”

“A cracker of a read and another winner from Simon Mayo!”

“I was utterly gripped and read this in one sitting! The whole premise was scarily real, and I loved how the story unfolded. I could feel the tension and fear in every page – loved it!”

“I read it over two evenings, both times staying up far later than normal as I didn’t want to put it down”

It starts quietly enough. A tick tick ticking you can hear in your ear. Tinnitus, you think. It will pass. BUt it doesn’t. It gets worse. And then you pass it on…

Before you know it, it spreads. Elsewhere across the globe, it emerges: small outbreaks at first, but then suddenly it’s a plague – and only days later it is already killing people.

In an increasingly affected north London school, teacher Kit Chaplin is struggling to understand what he is witnessing. Even Lilly Slater, his partner and an eminent vaccinologist, can’t work out what’s happening. As it spreads, little by little, they are inexorably drawn into the mystery behind the illness. And what they discover will change the world as they know it…

Exciting and urgently contemporary, this piercingly insightful novel tells the story of a global catastrophe through the eyes of the three people at the heart of the storm.

Simon Mayo MBE is a writer and broadcaster. His previous books include the Sunday Times bestseller Knife Edge, Mad Blood Stirring, Blame and the Itch trilogy, filmed for TV by the ABC. He hosts Drivetime on Greatest Hits Radio and hosts the ‘The Take’ film-review podcast with Professor Mark Kermode.